I’d like us to consider today’s Gospel reading as it regards the grace of God. Let us remember that the grace of God is the uncreated energies of God. His grace is His active presence, power, and activity in the world, and this deifying grace is given to all according to our ability and willingness to accept it. 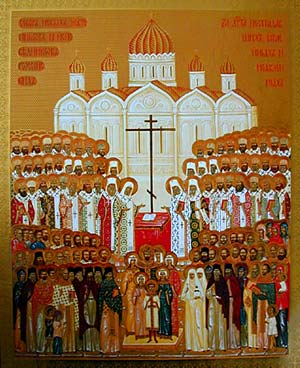 New Martyrs and Confessors of Russia

Today, in the Gospel lesson, the talents are given to these servants according to the measure that they are willing and able to receive. So far, it is pretty straight forward. The one who receives the grace of 5 talents doubles them. Likewise the one with the two talents goes and increases what he receives from his lord. They entered into, and grew, in the grace of God, and when their lord returned he gave them the same reward.

The third servant, however, has a response that has always left me a bit baffled. He is afraid. In his fear he digs a hole and drops the talent in and covers it up. But his fear doesn’t make sense. Ostensibly he claims to be afraid that his master is a hard man, reaping where he has not sown, and gathering where he has not spread seed. But just reading the account, it is clear the master is not, in fact, a hard man. Indeed the master of these servants distributed his wealth to them liberally, and left them to do what they would with the money and their own ability to grow.

So, like the other two, the third servant is entrusted with 16 years’ worth of salary and is left to increase it according to his willingness and ability—an ability his master must have assumed he had, otherwise he would not have trusted him with his money. Yet, this servant chose to bury the talent in the ground rather than take that which his lord had given him and use it to further his master’s kingdom.

All because he was afraid, or so he claims. Perhaps we can take him at his word, that he was afraid of his lord’s return, but perhaps there was something far more significant that he was afraid of. He was afraid of becoming holy. He was afraid of the fiery grace of God, and so he hid his talent in the ground. Pope St Gregory the Great writes that there are people in the Church who fear to set out on the path of a better life, and yet are not afraid to continue in carnal indolence; they esteem themselves sinners, and therefore tremble to take up the paths of holiness, but fearlessly remain in their own iniquities.

Many of us don’t like coming to church, and having expectations placed on us of how to act, how to dress, and how to pray and live. Many of us, when we are asked to make a commitment to Christ balk at the very idea. Many of us fear coming to Christ in the sacrament of repentance. We can say that it’s because we’ll be confessing the same thing over and over again, but what if the fear and shame that we feel is much deeper than that? What if we’re actually afraid of living the Christian life because of the reality of what that means? What if, like this servant set before us today, we’re actually afraid of the difficult life? Let us ask ourselves: are we afraid of taking up our cross and following after Christ?

Our Lord has granted us His divine image. He has given life to us, and when we threw it away, He became one of us to give it back to us. He poured out the grace of the all-holy Spirit upon us. He has given us the True Faith. He continually gives us Himself on a spoon in the Eucharist. He shares His bounteous life with us, yet we can still become afraid, not because we’ve only received one talent; not because God is stingy with His grace but because we fear to be transformed by that grace. Perhaps we fear it so much that we act as this servant did, and hide that grace away. If we can bury it, if we can remove all evidence of it, then it can have no power over us, and we can go about our lives in peace, coming and going as we please; no expectations placed on us; no onerous commandments; no obedience or self-sacrifice. And no salvation.

An insurmountable task has been given to the human race. That task is to become holy and perfect as Christ says, “be perfect as your Father in heaven is perfect.” This insurmountable task is the acquisition of the Holy Spirit. It is partaking of the divine nature. It is being clothed in Christ and being completely united with Him. It is to become holy. But we do not simply use our resources for this task. Our Lord and God has given us exceedingly great wealth in the form of His uncreated grace. It is the grace of God that we use to grow. It is this deifying grace that God liberally shares with the whole of creation.

And so a choice is set before us. God knows that we are capable of accepting and using His grace to grow in holiness. The choice is: do we grow? Are we to be industrious stewards of our Lord’s grace, submitting ourselves to the life in Christ, which includes the sacramental life of His Church and the service of our neighbor? Do we allow the grace of God to pour out of us to the people around us, touching their lives and helping them heal and come to know our Lord and God? If nothing else, can we deposit our one talent with the bankers? In other words, if we can acknowledge our sinfulness, can we call out to God for mercy? As St Gregory writes, If you regard yourself as a sinner, it is only right that you not drive God away from you!

I pray that we all may accept the grace of God that He freely pours out, and not reject it and bury it in the earth.